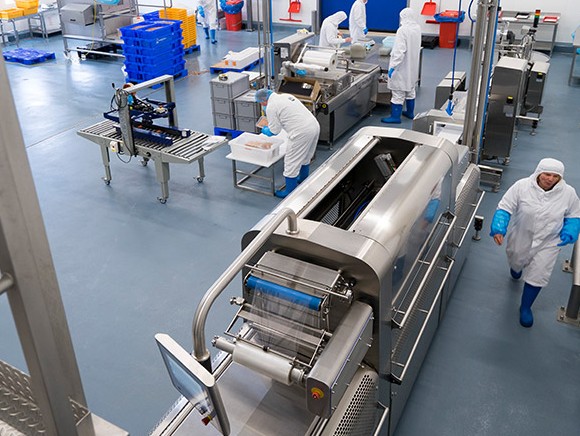 Innovative technology, improved sustainability and quality stimulate the market for fresh Dutch shrimps. In the story of the shrimp it is all about peeling machines, MSC certification and innovation.

At the harbour of Lauwersoog in Groningen is the new building that accommodates the enterprises Telson and Kant, 100 metres from the Waden Sea, 400 metres from the fish auction. Both companies are closely linked. The North Sea shrimps peeled by Kant are packaged and distributed by Telson. Kant, led by three brothers, designed and built a peeling machines for shrimps and put it to work at the shrimp peeling company. Rob Pikkert, founder and owner of Telson, admires the brothers’ perseverance. They persisted, even when their first attempt led to a bankrupt. The peeling machine was their plan B: until the peeling ban they organised the home peeling. He’s been through it all, as a veteran in the industry.

Rob started 40 years ago as a quality assistant with Heiploeg, fresh from technical school. He stayed there for 30 years. At Heiploeg he was also involved in the export of peeling to the Eastern Bloc and later to Morocco, after the ban on home peeling in 1984. ‘The Dutch didn’t want to peel outside their homes, in Poland they were wild about it. Peeling capacity grew, but shrimps became available for the market and we had to search for new markets, which was partly done through the supermarkets.’

Since recently, shrimps at Telson are packed in a complete packaging line of manufacturer MULTIVAC. ‘That was an obvious choice, not only because of MULTIVAC’s reputation, but also because we’ve had strong ties traditionally. The first packaging machines at Heiploeg was also from MULTIVAC and was placed near the laboratory where I worked then. It was operated by the quality department.’ At the time, most shrimps were sold at the fish shop, where the fishmonger weighed them for the customers in the shop. Most shrimps now reach consumers in Northwestern Europe through the supermarkets. ‘In a brief period of time Telson has achieved the quality certificates that supermarkets demand, such as BRC and IFS. Supermarkets can drop by anytime and see that everything is perfectly in order here. Which they do, often unannounced.’ 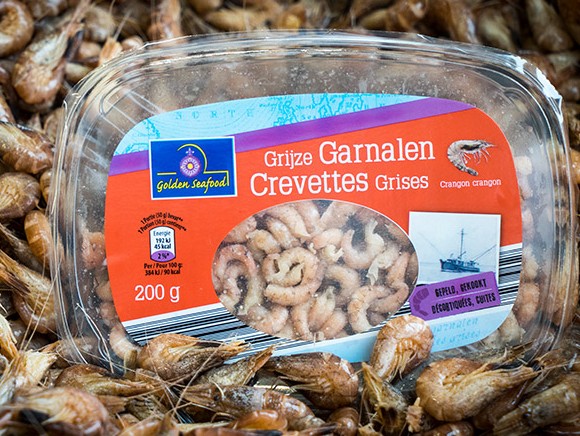 With the new packaging line of MULTIVAC, Telson makes push for quality. ‘On the fully automatic line we package shrimps in pre-formed trays, which are much more attractive for the shopping consumer. The trays are more expensive, but I think you should not be sparing with a products that costs the consumer 30 euros per kilo.’ As MULTIVAC’s sales manager Mart de Koning was involved in the project for the new line, which took a year from the first conversation to its initial operation. ‘We put the crates with peeled shrimps in an elevator, which takes the shrimps up and tosses them into e feeder with feeds a multihead weigher that fills the automatically erected trays with exactly the right weight of shrimps. The filled trays are fumigated and sealed through a MULTIVAC T 800 double-lame tray sealer, after which they are brought in line to be checked on metals and weight. Finally, a top and bottom label is applied and the package is presented on a turn table to an employee who puts the tray into a crate or box. The line is capable of processing 80 trays per minute. A relatively small number of operators is required. With this new line Telson can provide retailers in a reliable way with high-quality products with an appearance that fits the exclusive quality product that their North Sea shrimp is.’ 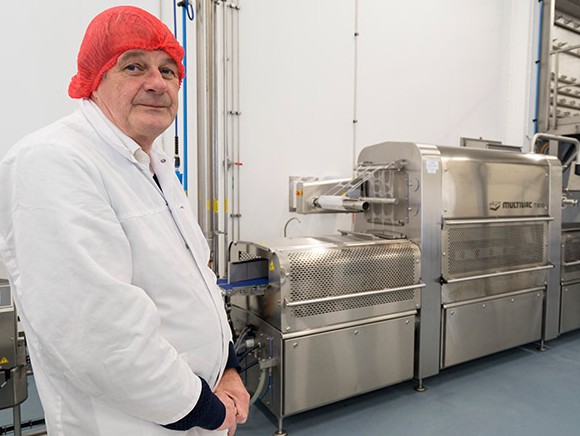 ‘Telson is a relatively new and small player on the shrimp market’, says Pikkert. The big market parties are Klaas Puul and Heiploeg. He expects that they will eventually turn to Lauwersoog. ‘After all, we are the exclusive processors of all shrimps that are peeled by the machines of Kant. The fact that we peel and package the products directly from the fish auction makes their quality unmatched. It meets the demands of consumers, who are increasingly aware of the sustainability of their food. The machines make the trip to Morocco unnecessary, with saves a lot of fuel. And of course a lot of time.’

For years, the shrimp branch has worked on improvement of the sustainability of the chain. On 12 December the Dutch, German and Danish shrimp branch was given the MSC certificate, which proves that shrimp fishing is in balance with nature. Pikkert sees more developments that will contribute to the sustainability of the chain. ‘The Economic Board of Groningen supports the development of the Prawner 2.0: in 2019 the first prawner should operate on hydrogen. Great that the shrimp fishermen should be the first to abandon fossil fuel.’ As far as Pikkert is concerned, sustainable fishing and the sustainable North Sea shrimp are the future, and Telson in ready for a central role in that future.