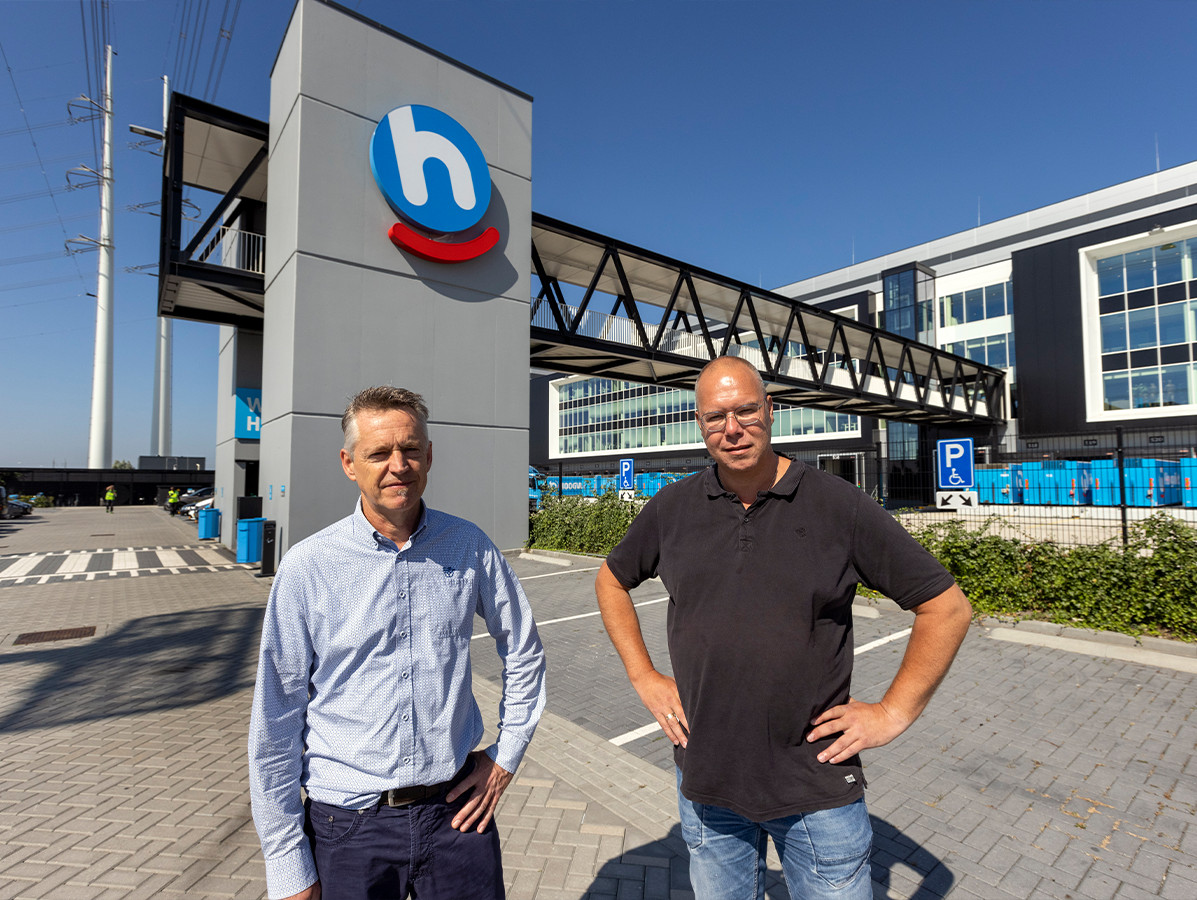 Bleiswijk is home to Hoogvliet's brand-new DC; state-of-the-art and ready for the future. Delivery reliability, efficiency and quality and especially hygiene were given top priority in the design. Alex Goedemondt, Process Manager at Hoogvliet: "I'm quite critical by nature."

'Automation and robotisation determine the flow of your business'.

Alex Goedemondt and Erik van Erk, senior consultants at RBK Group, are in good spirits. They have every reason to be. In a collaboration that they entered into five years ago, a state-of-the-art distribution centre was built, with a traditional butcher's shop on the third floor that supplies the top quality that Hoogvliet stands for. The showpiece? A robot line that packs, palletises and stacks those top products. And where the RBK FOBIS® automation system knows the path that each gram of meat travels between the slaughterhouse and the supermarket checkout. That means tremendous improvements in various areas.

"It's an opportunity that you only get once in a while", beams Hoogvliet veteran Alex (27 years in service), "because only when building a new facility can you tailor everything to your needs to ensure that you are set for the next 25 years." The previous DC in Alphen a/d Rijn, including butcher's shop, was 25 years old. "Improvements have been made in the meantime, but there are limits to what can be achieved. So you can imagine how pleased we were when we got the chance to build something new in Bleiswijk." 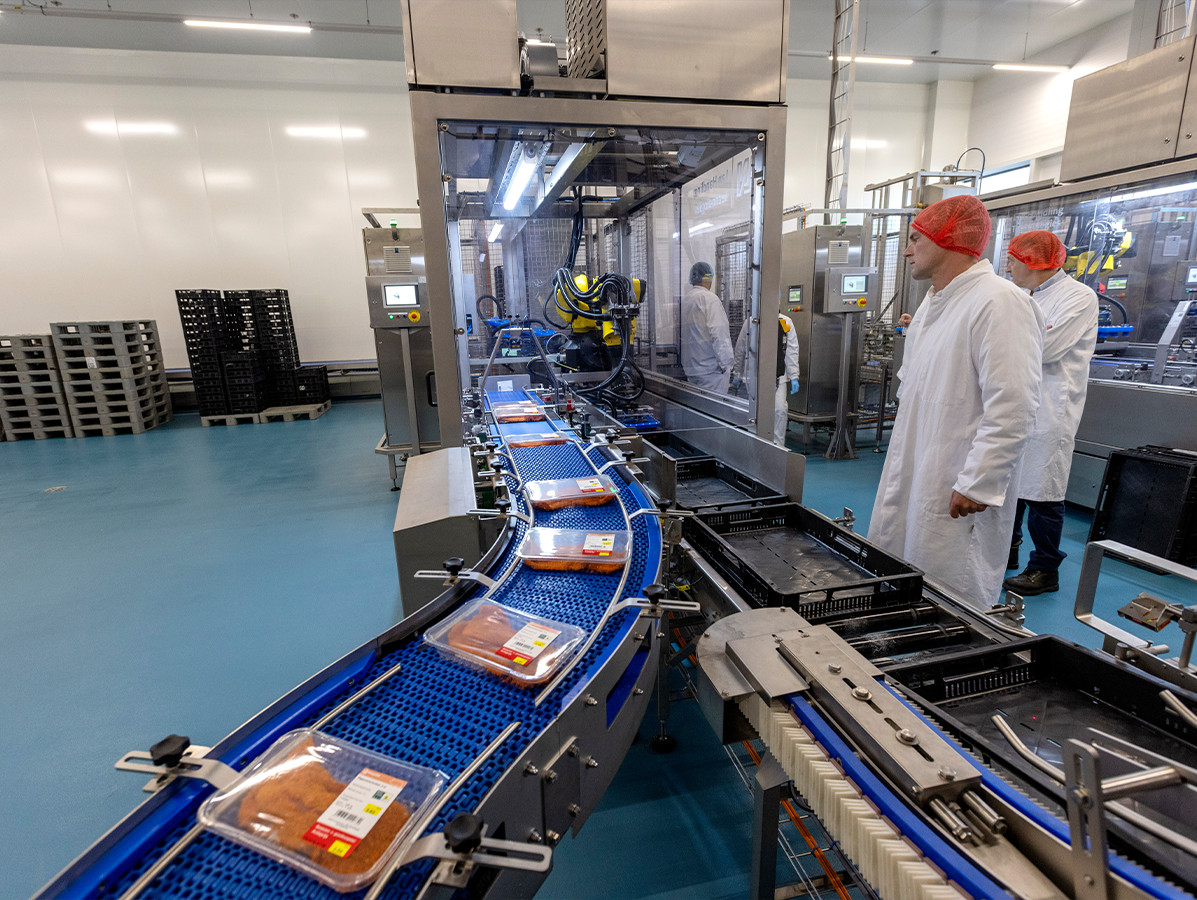 With something this big, as a company you have to ask yourself, 'what is really important to us?' Well, Hoogvliet is a family business through and through and that comes with certain values. For example, being in it for the long haul. Alex: "Sustainability comes first. The entire roof is covered with solar panels, and we generate most of our own energy. Moreover, it is a very water-efficient building. The toilets are flushed with rainwater, for example. Taking good care of your people is also one of those family values. That is why everyone has exterior light, even in the production area. But the biggest step forward is the working conditions. By realising a completely new robot line, people have to do much less repetitive work, and heavy work - stacking crates up to twenty high - has become unnecessary.

There were more factors involved. The three top priorities Erik was given were delivery reliability, efficiency and quality or hygiene. Because, as we all know, if you want to make a supermarket customer cranky, you especially need to have an empty (refrigerated) shelf. Erik: "With everything you do in a DC, you always have to ask yourself: what does it do for the delivery reliability? In the past, meat products were still put into trays by hand, and trays were stacked by hand and taken to the storage refrigerator. Thanks to the extensive automation with FOBIS® , there is a much more constant workflow. The speed is always the same, and the robots don't have any breaks. That is very beneficial for continuity." 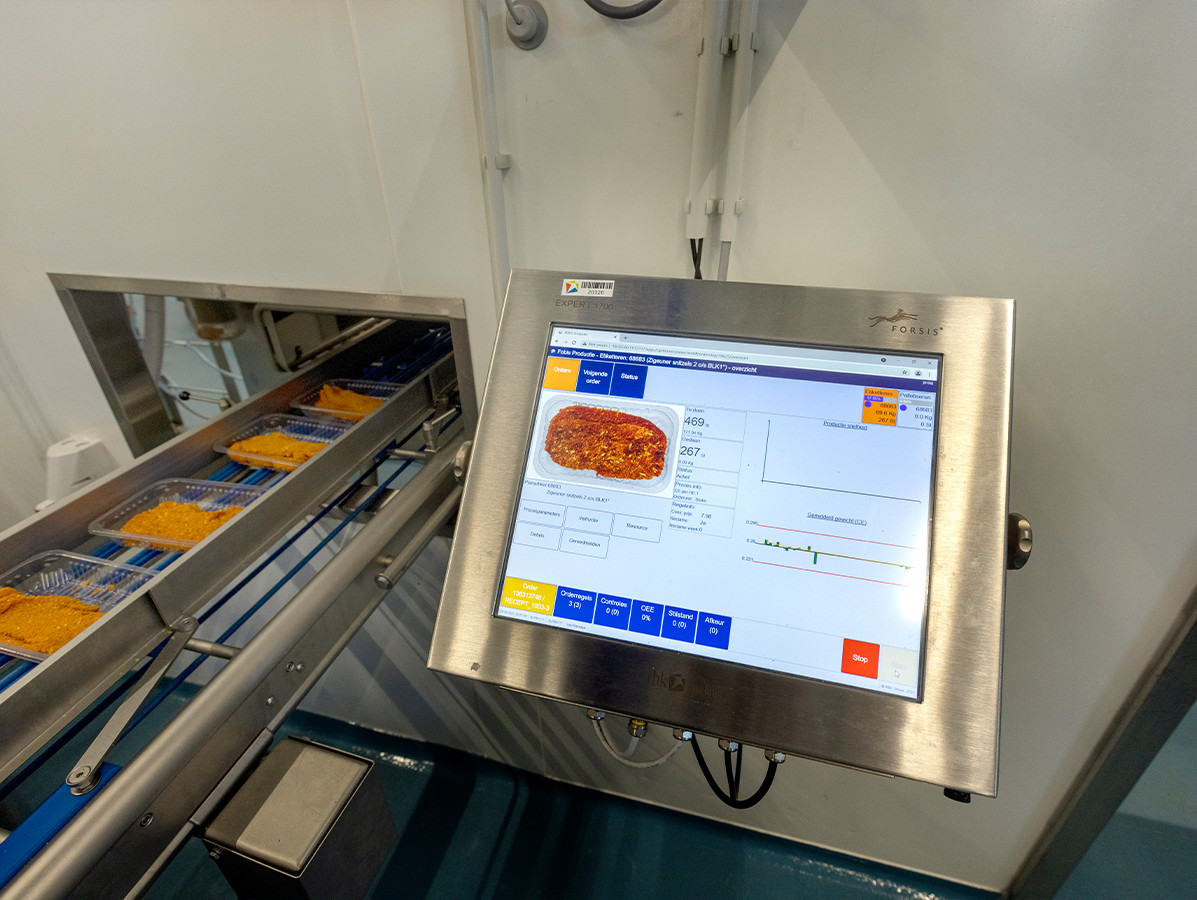 The work is now largely done by seven pick-and-place robots, a robot that stacks, transports and levels, to prevent one stack from becoming higher than the next, and finally it also palletises automatically. However, the brainwork that precedes this is done by the automation system. RBK was already involved in automation projects in the previous Hoogvliet butcher's shop. " That was back in the days when pen and paper still had the upper hand in production", says Erik, "at that time automation followed the existing system. However, with a new building you start the other way round. Right from the first draft of the design, you also take IT into account, because automation and robotisation determine the flow of your business."

You can see that Erik is happy with the result. "Everything goes automatically now. FOBIS® merges the various robot systems into a seamless entity in which everyone knows exactly how much of each product has to go where. When the order is ready and placed on a pallet, it is automatically labelled and the label is immediately sent digitally to the DC. The great thing is that production is planned independently of packaging. This also allows us to work much more efficiently."

Alex Goedemondt admits it wholeheartedly: "I am quite critical by nature. Erik laughs: "I can confirm that." Alex sometimes wants things that are impossible. "I can be pretty demanding, yes. But I rate the cooperation with RBK an eight out of ten. They have the knowledge and skill as well as the patience to deal with a demanding client like Hoogvliet." He also praises Maurice van Mierlo, ICT consultant at RBK. " When I came home dead tired in the evening, having left a question with Maurice that afternoon, I would get a message from him at ten o'clock in the evening. We did it, we're going to test it tomorrow'. Naturally, that is absolutely brilliant!"