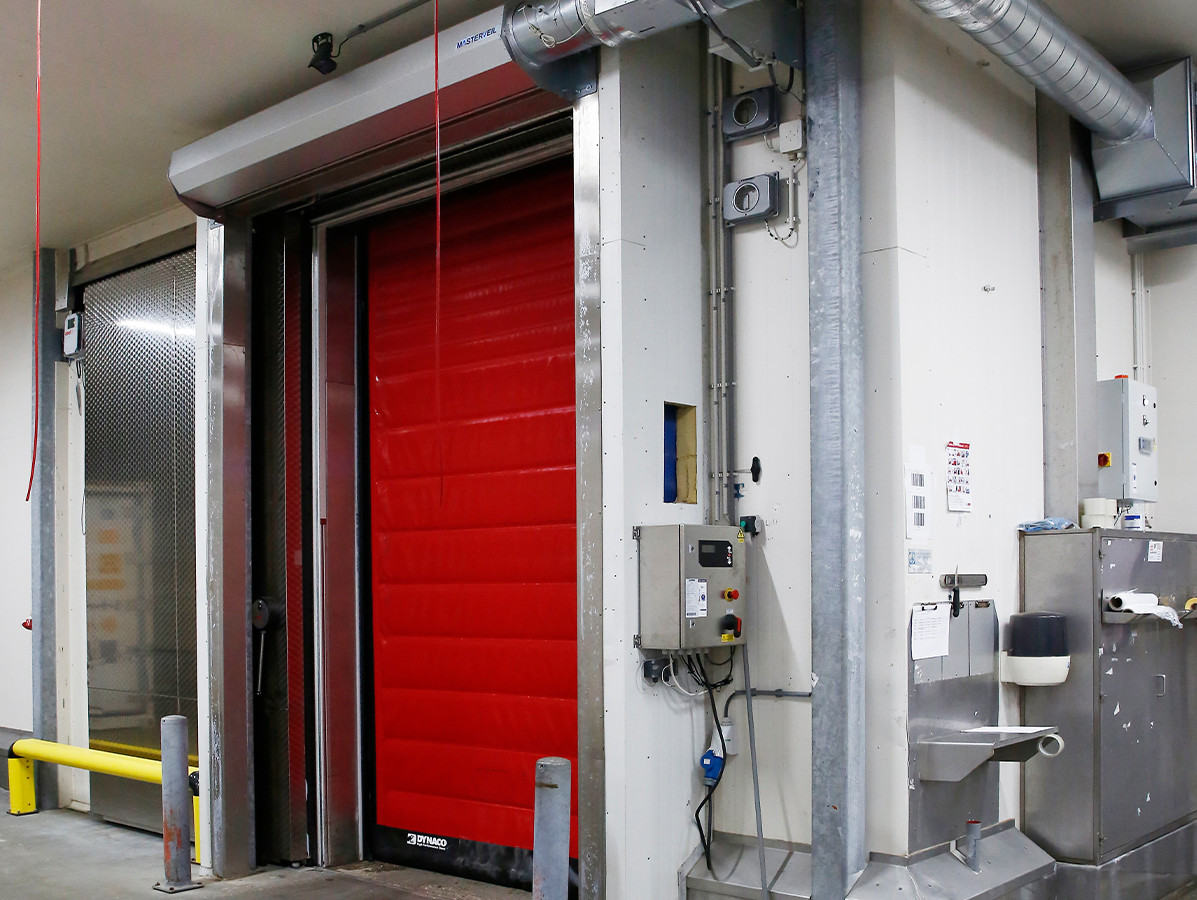 Warm air supply and ice formation in the cold store gave Seacon Production headaches. It endangered the quality of the deep-frozen fish products. A new air door in combination with a high-speed door provided the desired solution. With savings in labour time and energy as a bonus.

"We had a problem in our cold store: too much ice formation near the evaporators. Every day, sometimes twice, we had to de-ice the coolers by hand." Riekelt Bennik explains the problem that fish processor Seacon Production in Urk ran into. "The cause was the warm air that entered the cold store through adjacent rooms when the automatic freezer sliding door was opened. This warm air has a high humidity, which causes ice to form on equipment and pipes. Warm air and ice create an imbalance in the cooling fans, which leads to the risk of bursting of cooling pipes. We were faced with a considerable challenge."

Riekelt started his career at Seacon Production as a 14-year old holiday worker. 21 years later, he is now the company's chief technical officer. He knows the company like the back of his hand. He thought he could solve the problem with sliding doors, but Technical Manager Teun ten Napel had his doubts. For three years now, Teun has been helping to optimise the technical production processes. "I've seen solutions at several companies that don't work. Sliding doors don't work here, for example, because the doors of the freezer room are mounted in the wrong place. If you want to use these, either the door or all the coolers would have to be moved. That is too radical and too expensive. So we considered several solutions until Ronnie Schiltmans, owner of Prodoor, advised us to install a combination of an air door and a rapid-action door. Ronnie took Riekelt and me to Hanos in Apeldoorn, where a similar solution is already being used with great satisfaction."

The advice from Prodoor, with whom they have been working since 2007, was appreciated and implemented. "On a 'no cure no pay' basis," Ronnie adds with a laugh. "Teun said 'I've seen so much, just do it. But if it doesn't work, you can come and take it out yourself!' I took up this challenge because I knew it would work."

"As Prodoor, our job is to come up with the best door solution. Based on experience and application, we make a fair proposal." Ronnie outlines the solution: "At Seacon Production, a high-speed door was installed in the cold store in January 2021 with shorter opening and closing speeds than previously realised by the electric freezer sliding door. The Airstop air door from Masterveil also prevents humidity from entering the cold store." Riekelt: "I keep an eye on the temperature of the cold store. This does not rise dangerously anymore, it now stays at a steady -20 ℃. That's how we ensure the quality of our product." Teun adds that another benefit has been achieved: savings on labour. "We have not had to clean the coolers for two months now. I also expect a difference in energy consumption, but we will not be able to tell for another year. Colleagues have already noticed that it stays cooler." 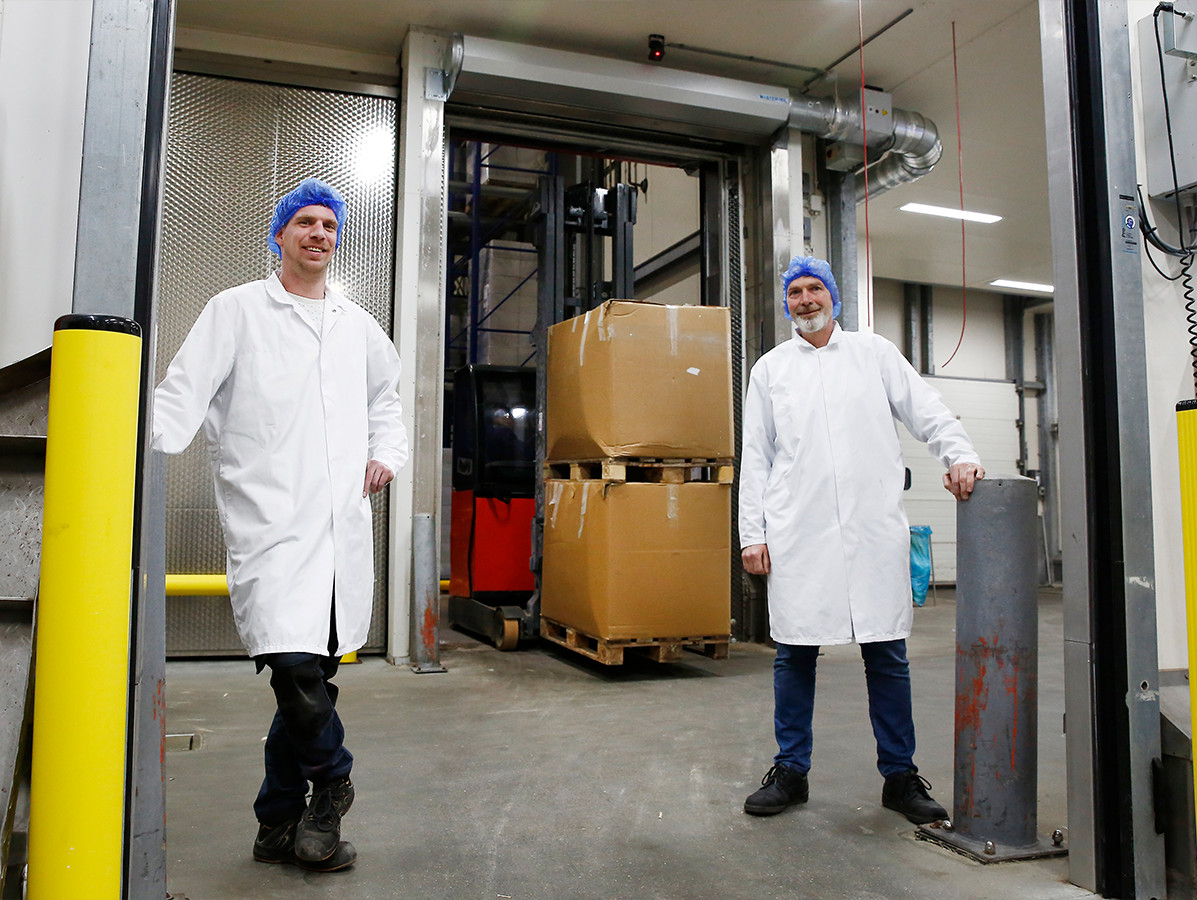 "We can help a company make a difference," explains Ronnie emphatically. "With our door solutions, we monitor food safety, which is vital for a company like Seacon Production. They need to constantly maintain the trust of their customers for the sale of fish products." Teun and Riekelt name a few: sole, langoustine, flatfish and cod. Fish that finds its way through supermarkets and wholesalers in their own country and worldwide.

As a service provider, Prodoor is involved in buildings where food production, processing and storage take place. Also with new buildings or the plans for new buildings. "We help to make the right building choices for operational safety and sustainability." Ronnie describes that in the past the decision on doors was literally and figuratively a 'closing item'. "Now food processors who are already familiar with us often take the doors out of a construction order and buy them separately. They know that saving on doors can have a negative effect later on. Then there can be a problem like the one at Seacon Production, which we fortunately managed to solve well."

Together, Riekelt, Teun and Ronnie look back on a successful project that was achieved within budget. "It was worth the investment," confirms Teun. "I was hoping that Ronnie's proposal would be the solution", says Riekelt. "Great to see that it works! Now our fish stays at the right temperature using much less energy, without the risk of broken coolers. One less thing to worry about. Ronnie smiles and concludes: "For me, customer satisfaction is the most important thing!