Spirulinazia is still to come

Spirulinazia is still to come 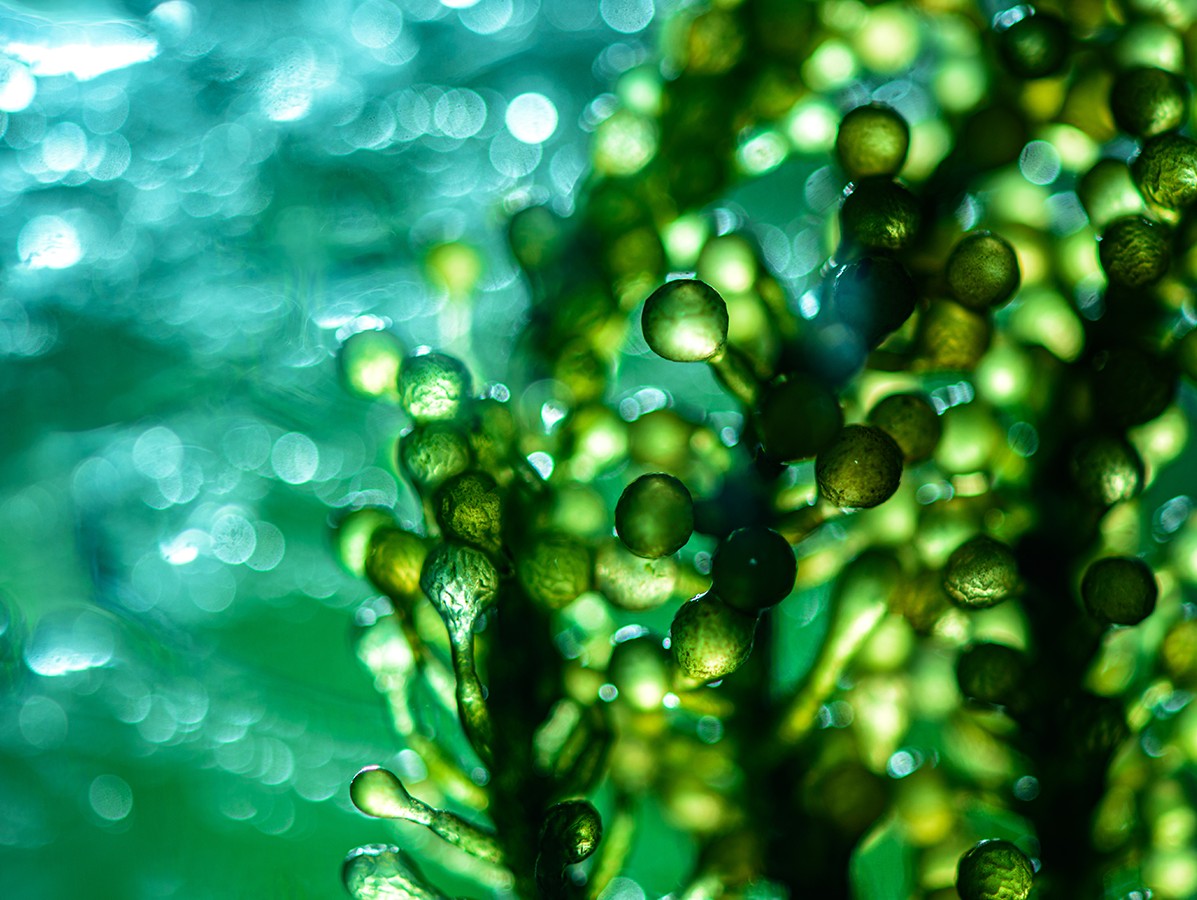 A plate full of algae is not on the menu yet, spirulinazie is still some time away. However, algae are gaining little popularity as an alternative source of protein. It is expected that algae will become an indispensable part of the food system. Interest from the food industry is growing, but for the time being there is still much to be gained and researched.

Microalgae are very small plant-like organisms between 1-50 micrometers in size, without roots, stems, flowers or leaves. There are hundreds of thousands of species in both fresh and seawater, where they are at the base of most food chains. The most well known and applied species are Spirulina (a saltwater algae) and Chlorella (a freshwater algae).

Microalgae contain natural proteins, the good fats omega-3, 6 and 9, various vitamins, minerals, irons and amino acids, and a high content of dietary fiber. The omega-3 fatty acids in fish originate from microalgae. According to a study by the Nutrition Centre, algae - provided they grow well - are a good source of protein, iron and vitamin B1; nutrients that can also be found in meat. They can therefore serve as a meat replacement source of protein. The production of useful substances from algae can be controlled by manipulating the growing conditions. A nice side effect of growing algae is that it has little impact on the environment: the amount of soil and fossil fuel needed for cultivation is nil.

Algae products fit in well with a number of current trends in the food industry, such as the increasing demand for vegetable ingredients and the demand for healthier and sustainably produced products. Algae are an alternative to ingredients that are less sustainable, or are under pressure due to scarcity. Therefore, food companies that want to make their value chain more sustainable quickly end up with algae.

In itself, the use of algae in food is not new. The Aztecs let them dry in the sun and turned them into a kind of cake. Algae have been used for a long time in powder or supplement form to add to dishes such as soups and sauces. As early as 1974, the United Nations proclaimed them 'The best food for the future'. And that future is now.

Algae grow in both salt and fresh water. They have a high growth rate. Cultivation takes place in closed reactors or open basins. The cell walls of algae (the fibres) are difficult for humans to digest, which is a disadvantage. This is one of the reasons why both Spirulina and Chlorella are mainly sold in powder form or used as part of a food product or as food applications. Some components of algae, such as Spirulina's purified phycobiliprotein, are already used in smarties and other confectionery so that they turn blue. Algae are also already used as seasoning in sauces, soups and fresh pasta.

Food producer Damhert, who had already pioneered the introduction of the insect burger, took another step forward in the market some time ago with the introduction of the Spirulina burger. "We process the Spirulina in powdered form into our burgers. In fresh form they are very slimy and in fact inedible. Unfortunately, we do not have the possibility to export our fresh products, including the Spirulina, to the Netherlands. So you can only find it in Belgian supermarkets", says Marie Peeters of Damhert Nutrition. 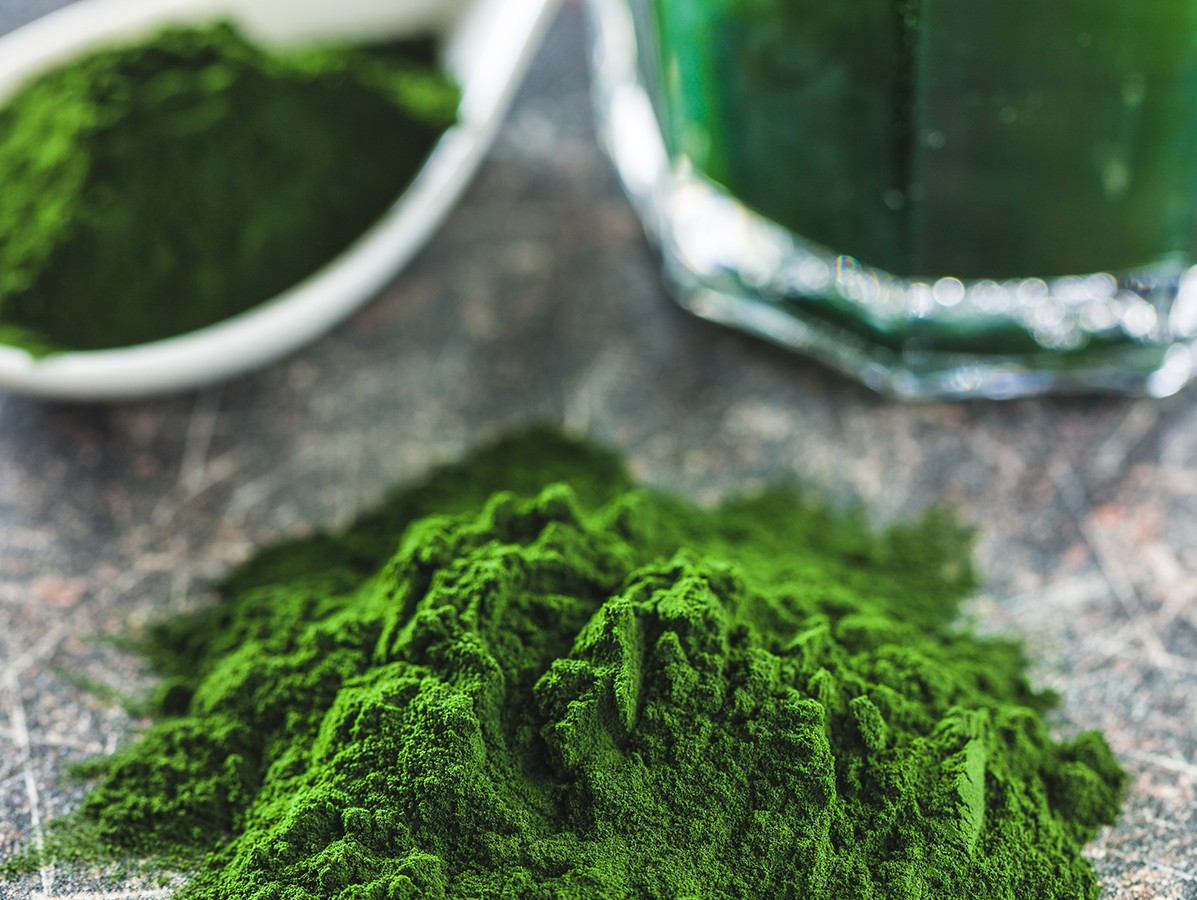 A few years ago, the French company Roquette introduced flour from protein-rich fermented microalgae to the market as a functional ingredient for (sports) foods. In 2013, the company won the innovation award of the Food Ingredients Europe trade fair for the high-fat variant. Roquette sells the algae applications under the brand name Algility. At sports centre Papendal, where chef Erik te Velthuis works in the kitchen, the micro algae of one of the few Dutch growers Duplaco are used. The KNVB is also experimenting with the micro-algae.

Algae are green, not a wrong colour in itself. But, there is always a but, this green can also be an obstacle. The vegetarian customer in question might associate green with leafy vegetables, with fresh and healthy ones. The classic carnivore can also associate green in a burger with decay. Supermarket chain Jumbo experimented in 2016 with algae burgers from Damhert, but ran into this problem. End of story for the algae burger.

The 3 types of algae burgers of Labeij Food Products by Frank Lagas that are offered under the name It's Greenish can be found in an online webshop. "I'm developing the fourth algae burger combined with the residual flows from the leek industry. Normally, part of the leeks are left behind on the land, which is a mortal shame of course. We are now looking at how we can combine that with algae in our own test room. What are we going to call the new burger? I don't know yet, because we've just started the process." The enthusiasm about algae is there, the awareness of it as a healthy product with a wide range of possibilities is also present. So why is the product not yet massively embraced and processed? Frank: "Fear, I think. It is a thoroughly healthy green product, but it is still relatively unknown and unknown makes it unloved. Why do we persist with our products? It's because I believe in it and because I want to do something good for the world with my company. Ten years ago you didn't bother to bring vegetarian and vegan products onto the market and now they are very popular. I expect the same with algae products. Time will tell."

Despite of the enormous promise of microalgae as a sustainable source, only a small part of the applications is currently actually in operation. This is also due to the high costs of the production process. In order to make this profitable, production costs have to be reduced. In 2017, René Wijffels, professor at Wageningen University, talked about 40 euros per kilo. By way of comparison: a kilo of soy costs about 2 euros per kilo. However, the cultivation costs can be compensated by refining the algae on site and purifying the ingredients, creating a net higher value from the algae. In order to make a technically - but also economically - feasible extraction possible, various cultivation and harvesting systems are being researched by Wageningen University and Research, among others. The Algae Production and Research Center (AlgaePARC), a private-public cooperation project, develops the knowledge and technology needed to grow microalgae on a large scale and profitably as a raw material for food, feed, fuel and chemicals.

The applicability and possibilities of algae are gradually penetrating major players in the food industry. For example, Corbion and Nestlé have recently formed an alliance and will work together on the development of vegetable nutrients from microalgae. The collaboration combines Corbion's knowledge in the field of microalgae and fermentation with Nestlé's experience in vegetable food production. The aim is to improve functionality, taste and nutrition for use in different products. The two companies are investigating what could be the best taste, functionality and composition of nutrients. To be continued.