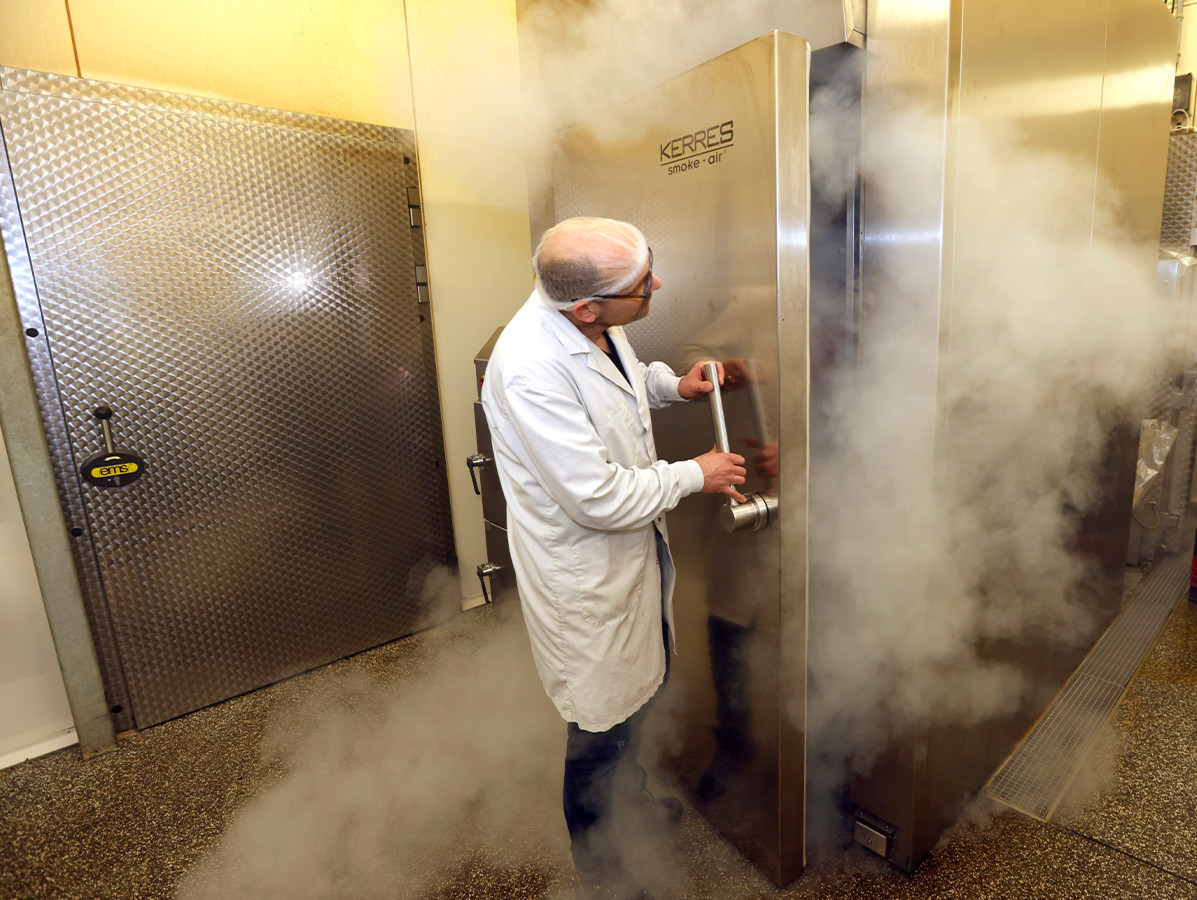 The fourth generation is now at the helm of Keurslagerij Van der Meer. The three brothers have honoured the craft, but have also increased the capacity considerably. With thanks to the new smoke cabinet.

The smell of smoked beechwood meets you as you enter the premises in the business park on the outskirts of Roelofarendsveen. "Today, we are smoking a few batches of sausage," says Patrick van der Meer. Together with his brothers Marco and John, he runs Keurslagerij Van der Meer. The company saw the light of day in 1913 in the centre of the village, a few kilometres away. Youngest brother Marco: "We are the fourth generation, and the fifth is also working with us."

Their parents Cees and Ria were the face of the butcher's shop for sixty years. In recent years they have been taking more and more steps back; at the end of 2019 they finally hung up the butcher's apron for good. When the brothers stepped into the business one by one some twenty years ago, capacity was increased. "Suddenly, in addition to our parents, three families had to make ends meet with the income from the butcher's shop, so expansion was required," says Marco, who takes care of the support for production and the shops. So, in addition to the existing butcher's shop in Roelofarendsveen, where brother John is in charge, a shop was also taken over in nearby Nieuw-Vennep. Production was also expanded.

Patrick, the eldest of the bunch and responsible for production: "We were already producing meat products and sausages for fellow butchers in the area. The demand for these products was increasing, so in 2005 we moved the production location to this larger building. Now we produce cooked sausages, barbecue and grilled sausages, bologna, smoked meat and various types of ham and bacon. In addition to our own shops, we also supply fellow butchers and Albert Heijn's Streeckgenoten. Depending on our staff capacity, we also bone out carcasses of cattle and pigs for our own butcher shops." 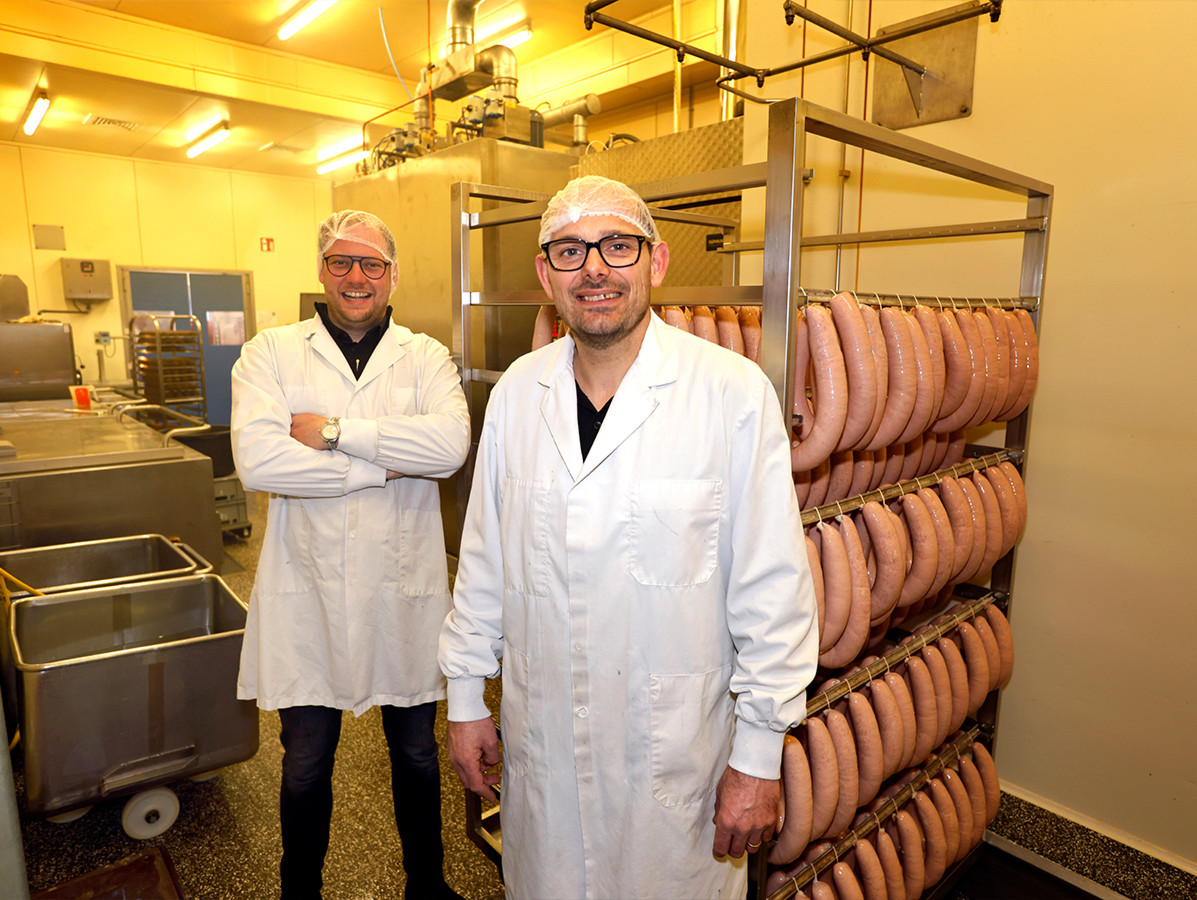 The sausages for fellow butchers are largely supplied via wholesalers. "Butchers often have no room to produce their own, but they do want a traditionally made sausage," says Patrick at the back of the production site, where two employees are busy portioning the sausage meat. "The meat comes from pigs, beef, veal or chicken. After mixing, it is processed in a natural casing - nowadays many Dutch butchers also work with artificial casings. Then the sausages are smoked and cooked. Some are frozen immediately after smoking and go to wholesalers as semi-finished products, so that butchers can cook the sausages themselves and have freshly cooked sausages every day."

Continuity and sustainable relationships are important values within the family business. For example, the company employs almost exclusively permanent staff - around 50 people by now - and prefers to buy the meat from permanent suppliers. Marco explains: "The meat from our beef suppliers has a consistent quality and colour. The pork in the shops comes from Heyde Hoeve, among others. A special breed is raised there, the Duroc pig, and a lot of attention is paid to sustainability. We also sell meat from the Livar pig." 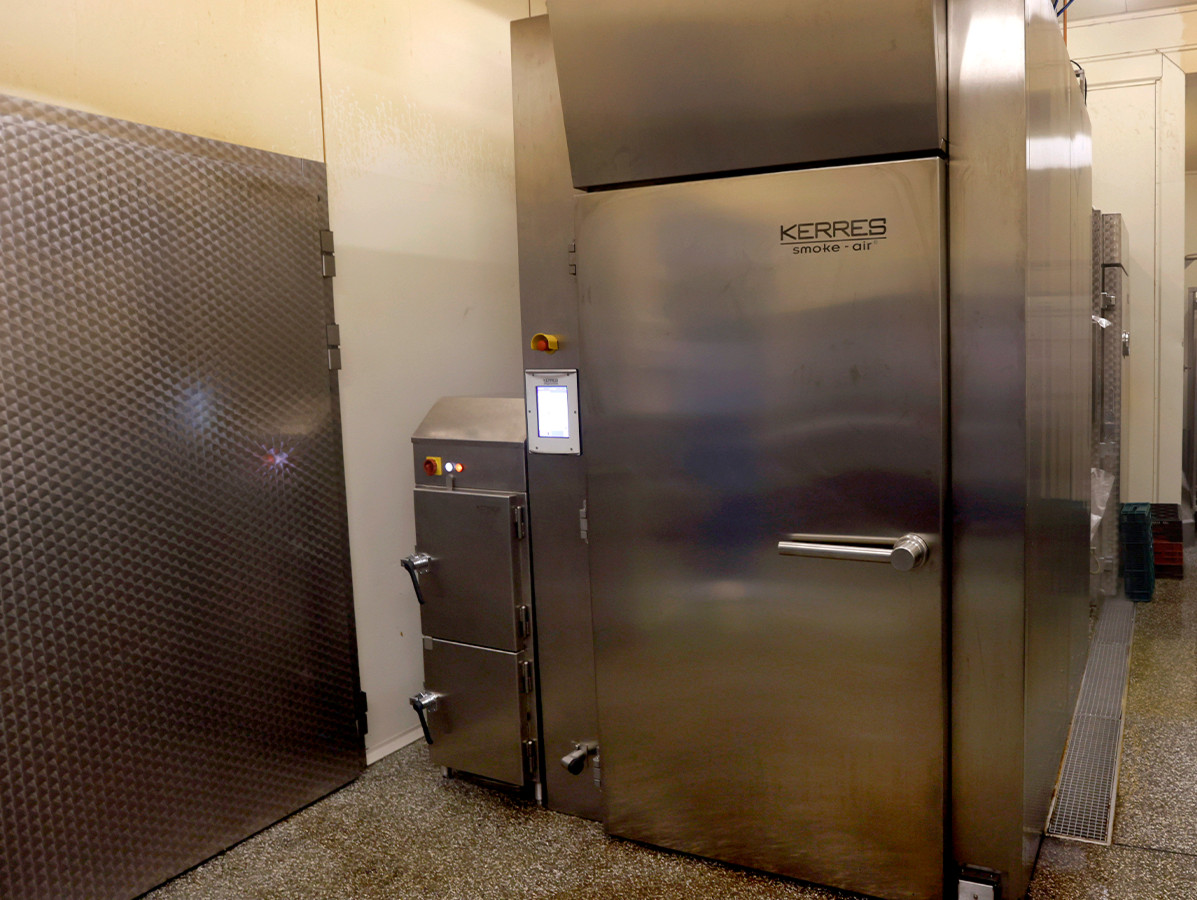 To meet the growing demand for sausages, the brothers decided to purchase a new smoke cabinet. Patrick: "We couldn't manage to run the required capacity during the day; I often had to put a new batch in the smoke cabinet at ten o'clock in the evening and again at five o'clock in the morning. With our new smoke cabinet from Habuba, we can easily run four sessions a day; it saves about one and a half hours per round."

The Kerres Jet Smoke 2850 2-car chamber, as the purchased cabinet is called, is equipped with the unique hybrid system whereby horizontal and vertical smoke air is blown past the products. "This way the products dry faster and the smoke is evenly distributed. In addition to smoking, the cabinet also cooks, bakes and ripens, so it is flexible in use," says Stephen van Uhm, director of Van Uhm & Habuba machine supplier for the entire food industry. Patrick adds: "The sausages are now all ready at once, in contrast to the previous smoking cabinet. And thanks to the internal cleaning system, cleaning is also a piece of cake."

Although the partnership between Habuba and Van der Meer goes back a long way - the grinder and thermoformer at the production location were also supplied by Habuba - it was by no means a foregone conclusion that the brothers would order from the machine supplier again. Marco: "We did a lot of research and testing with several suppliers, but this one really turned out to be the best."