Lab meat: meat from a test-tube

Lab meat: meat from a test-tube 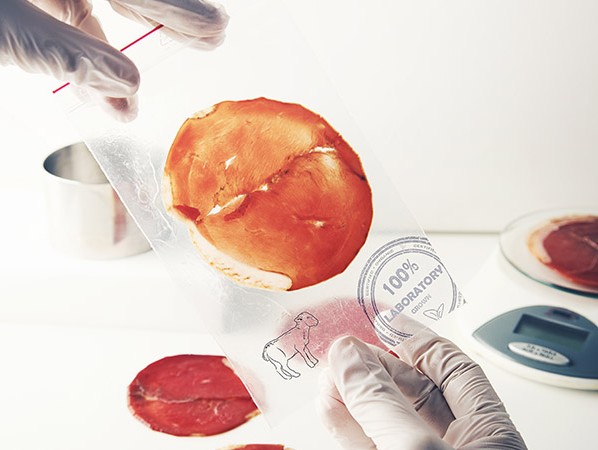 Five years ago in London, Mark Post, pharmacologist and professor in the vascular physiology at Maastricht University, and his team were the first to demonstrate in vitro meat. The costs: 250,000 Euros for an in vitro burger. Since this event, Post is by far no longer the only one who has sunk his teeth into this matter. Where have the developments led to so far?

In vitro meat (also called culture meat, or test-tube meat) is meat that is grown in a laboratory from animal stem cells. The production technology is more or less the same around the world. In short, this process can be described as follows: stem cells are taken from a living animal - in the case of Post, from a cow - and these cells are then added to a culture substance of sugars, amino acids, and fats. The stem cells multiply and form muscle fibres. Naturally, this process means that the donor cow is saved from the slaughterhouse. By the way, the whole idea of growing meat without having to keep and slaughter animals is not new: statesman Winston Churchill already had some thoughts about it.

Why in vitro meat?

There are plenty of alternatives for meat, and their numbers are growing. So why would in vitro meat be so interesting? Because of the climate, the increasing food problems in the world (by 2050, the world has to feed 9 billion people), raw materials are becoming scarcer, the biodiversity, the manure problems, and animal welfare. Moreover, we are confronted with animal diseases and meat scandals such as horse meat labelled as beef. In vitro meat can be created in a more stable and controlled environment – read laboratory – and you can add additional nutrients and proteins. The process can be carried out locally, which will make the many transport movements we have to use now obsolete.

There are objections as well. Such as the price: experts cannot seem to agree on the ultimate price. Today's production costs are so high that an in vitro burger in 2018 would have to be priced at ten to twenty Euros per kilo. It is also still unclear how the meat can be safeguarded from infections and there are still a lot of question marks about how to create the taste and texture in such a way that it resembles animal meat. And it is a lengthy process. Researchers expect that it will take another ten to fifteen years before in vitro meatballs can be found in the supermarkets, by which time there will already be sufficient alternatives for meat, say the critics.

Even though it all sounds very much like science fiction, it seems that the consumer will have no problem with accepting in vitro meat. That is, on paper. Online research agency Flycatcher conducted a survey amongst 14640 respondents. The most important goal was to get insight into the consumer's opinion on in vitro meat and whether they would want to try and buy this meat (when it would be available in the shops). The end product had to be a piece of meat that would be more or less indistinguishable from a traditional piece of meat. 63 per cent of the respondents indicated that they would be open to trying it.

No, it is not (yet) allowed

The technology is reasonably underway and yet the road from lab to shelf seems long. One of the bumps in the road is a reluctant government. Eating in vitro meat is not yet allowed, as decided by the Dutch Food and Consumer Product Safety Authority (NVWA) in May this year. Erratic and fussy, say the proponents. Logical, says the Ministry of Health. "It is not a simple subject. In order to market in vitro meat, manufacturers must be able to demonstrate that their product is absolutely safe for human consumption. Consumers must be assured that it won't make them sick." So there is still a lot of work to be done. As in vitro meat is considered a 'novel food', a new type of food product, it must be approved by the European Food Authority. And that may take a while. The new European Novel Food Regulation was adopted on 25 November 2015 and became effective from 1 January 2018. The regulation deals with the admission of new food products and new food ingredients. These also include newly developed food products produced by means of new technologies and production processes as well as exotic products.

In vitro meat is hot, and not just in the media. Worldwide there are many scientists and around thirty start-ups working on the development of in vitro meat. The Dutch start-up Meatable, launched in collaboration with scientists from the University of Cambridge and Stanford University, recently received a financial injection of 3 million Euros to solve the scalability problems of the ‘cell-based meat’ industry. The company owns a patent with which 100% real meat can be produced with one stem cell without having to breed and slaughter animals. 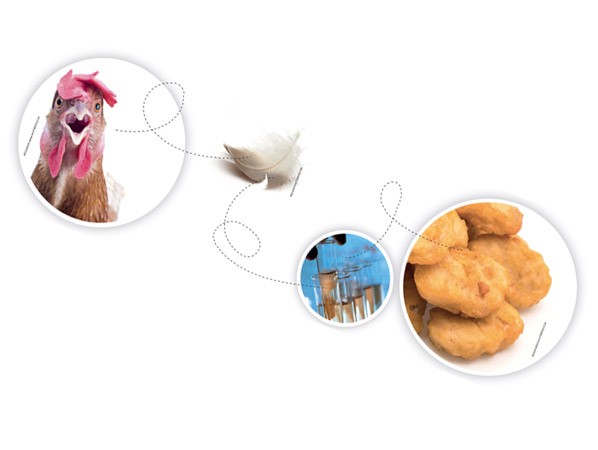 At other locations in the world, the developments go faster than in the Netherlands. Food company Just in San Francisco, for example, produces a new type of in vitro meat: chicken nuggets grown from cells from chicken feathers. According to someone from the BBC, who got the opportunity to taste the meat, the chicken tasted just like chicken. The chicken from which the cells were taken was still alive: somewhere on a farm far away from the laboratory. The outer layer of the nugget was crunchy and the meat was tasty. The texture of the inside was a little bit softer than those of McDonald's or KFC. The production of the chicken nugget takes two days and is done in a bioreactor with the use of a protein that stimulates the growth of the cells. This protein ensures that the meat feeds itself while it grows and it gives the nugget the desired texture. Josh Tetrick, Director of Just, expects that the nuggets will be on the menu of a few restaurants by the end of the year.

What does the industry think of all this?

What do experts who are handling meat on a daily basis think of these developments? Ruud Luiten, Manager Product Development at J.F. Luiten Vleeswaren: "As a product developer, I find this extremely interesting. The technological development is, of course, absolutely marvellous. In my opinion, the chance of success depends on a number of factors. An important factor for the general acceptance will be the ability to produce in vitro meat without having to use embryonic animal tissue. I suppose that this will eventually be possible. As long as this is not the case, the consumer will never buy it. Furthermore, I'm curious to know the quality and taste of in vitro meat. The current publications are nearly always about ground and/or spiced products. The taste of "real" meat, however, is determined by the food the animal has been given, the living environment, and the amount of exercise it has had. And let's not forget the rim of fat. As these elements are exactly those that are missing with in vitro meat, I'm very interested to taste a piece of pure in vitro meat. The price will also become a determining factor. Practice learns that consumers are only willing to pay a certain amount more for products that are an alternative to meat. Additionally, the increasing number of plant-based meat replacement products (whether they look like meat or not), as well as the increasing quality, will determine if in vitro meat has a chance of becoming successful. On the other hand, eating meat gives many consumers a certain experience and (taste) sensation which cannot be achieved with most of the current vegetarian products and which may be feasible with in vitro meat. So I believe that there are still quite a few obstacles to overcome and it is difficult to say whether it can become a success, but it most certainly is a very interesting development!".

Lenny Kamphuis, owner of Servontyn Catering in Arnhem: "One of the five classic senses is taste. The right combination of taste, smell, colour, and consistency can create a taste sensation. In that respect, I don’t believe for a minute that in vitro meat will ever be successful. I realise that there will probably be no way of escaping it, but for me, it has no added value so far. Researchers claim that it will eventually taste just like real meat, but I'm not convinced that this is possible. Cultivated is cultivated and will always remain cultivated".