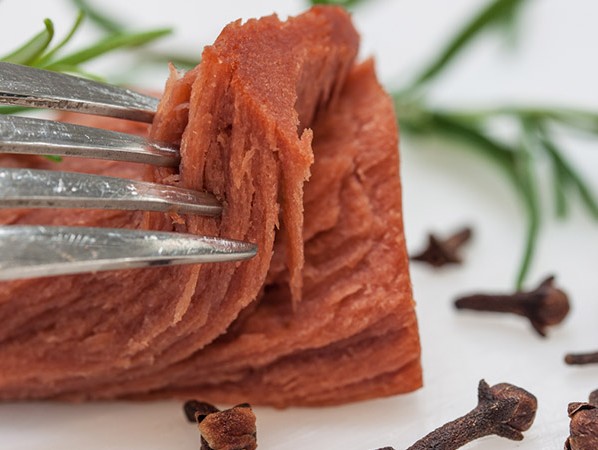 It is a challenge for production companies to make high-protein foodstuffs, such as vegetarian products, that have a fibrous structure. Apart from the used proteins and other ingredients, the technology that is used has a determining influence on the texture of the semi-finished products or end product.

With regard to proteins, we distinguish various categories. There are structural proteins that add structure and firmness (such as collagen and elastin in meat), storage proteins that ensure that essential nutrients (such as globulin in plants) can be stored, and biochemical proteins (such as enzymes). When processing proteins, the structure is affected on different levels, causing structural change. During technological processing, proteins take on a different spatial structure (denaturation), they start to interact with each other (crosslinking or aggregation), or they fall apart into smaller peptide chains (chemical or enzymatic hydrolysis). In short: technological processes give another structure to the protein, and thus to the product in which the protein is present as well.

It takes several processes to extract a protein from a raw material. Primary protein enrichment of certain fractions from food crops takes place after a targeted mechanical or chemical process such as cutting, grinding, (air)classification, or by extracting with a more advanced separation. This fraction can then be further purified by washing, precipitating (settling), or by using more specific separation technologies like membrane technology or chromatography. After the unwanted elements have been removed, a fairly clean protein fraction remains. There are many applications that require proteins in a non-denatured form. This can be achieved by very mild separation techniques such as dry separation; the proteins will then still be maximally soluble and can be used for high-functional application, for example as an emulsifier or in foams. Partially denatured proteins have the same nutritional properties but not always the right functionality. Even so, these proteins often appear to be suitable to create structure in, for example, meat substitutes.

For some meat substitutes, it is desired that the fibrous structure of meat is imitated. The tricky part of this is that it must be done by using plant proteins, which often have a globular shape. There are several technologies that can be used to get a fibrous structure. 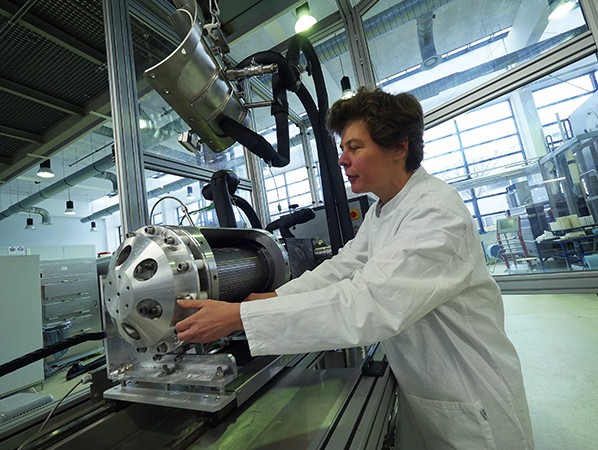 The most common technology is extrusion, during which proteins are texturised by using high temperature and mechanical energy. Ingredients with a high-protein concentration, whether or not mixed with a carbohydrate and a small amount of water, are propelled through a cylinder-shaped rotating screw. The high temperature makes the moisture evaporate, it ensures the denaturation of the protein and the creation of bonds with other ingredients. The end result can be influenced by changing the build-up of pressure, temperature, moisture content, other ingredients, and the shear created by the screw. This enables productions of porous texturised chunks of protein or granules that are similar to, for example, chicken meat. By conducting the extrusion process at a low moisture content, it is possible to create texturised vegetable protein (TVP), which is used as an ingredient in meat substitutes.

Another technology to create a fibrous structure is electrospinning. With this process, a protein solution is poured onto a base via a nozzle, whereby the difference in voltage between the nozzle and the base is the driving force. When coming out from the nozzle, the solution forms a thin thread. Research has shown that there are only few protein combinations that can be processed in this way and this technology is not yet used for the production of meat substitutes on a large scale.

A promising technology that is currently still being developed is the shear cell technology, which is developed by Wageningen University & Research. With shear cell technology, high shear stress is applied to a mixture of biopolymers that also include protein. This is done by bringing a rotating plate underneath a stationary cone. The rotation creates and aligns the fibres. This technique also offers the opportunity to create a fibrous structure. The ultimate goal is to make a steak-like structure.

Wageningen Food & Biobased Research supports manufacturers by adding their knowledge and practical solutions to create and stabilise textures and structures in foodstuffs – from a molecular to product level. The technologies described above can be used to turn various globular proteins into a fibrous structure. It is often a combination of temperature, pressure, and shear strength, which must be supported by ingredients and additives, to get a successful result. The ultimate goal is to develop new, sustainable products that consumers will like to eat just as much as a real chicken breast or pork fillet.

The advantages of leasing

Game changer is looking for supporters

Looking into the future